During lockdown, we had the pleasure of speaking with one of Covent Gardens most experienced performers, Guy Collins, also known as Groovy Guy!

Guy is a well known comedy rope walking entertainer who has travelled the world performing his tricks and shows to audiences around the globe.

Find out more about Groovy Guy 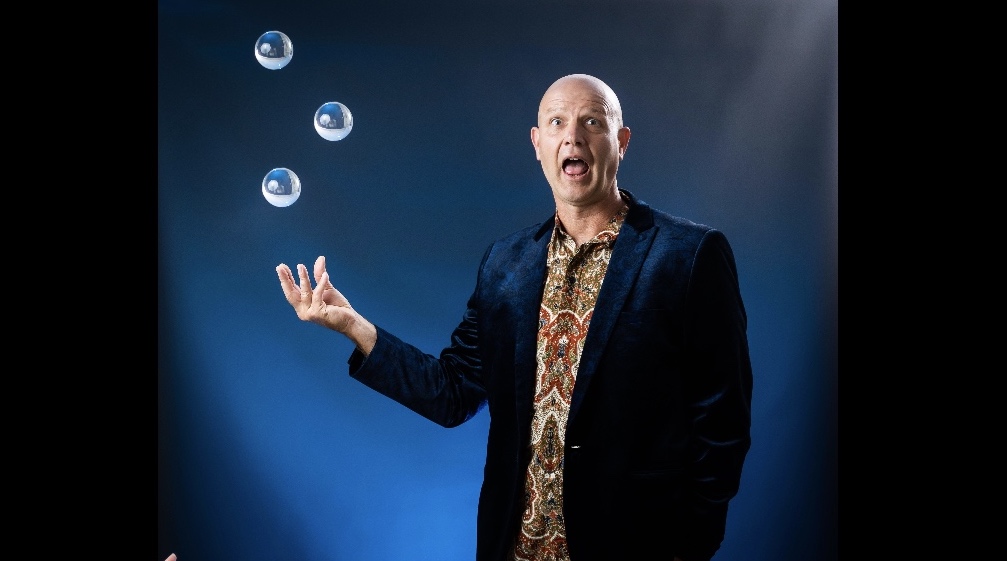 Guy got into performing at the age of 19 whilst he was hitchhiking through France with his friend who had just learnt to juggle. Some German hippies at a campsite they met said ‘oh you can make money doing that on the streets’. So that’s exactly what he did. “So i started just juggling 3 balls on the metro in paris. I then went on to juggle with 3 Germans, a guitarist, a trumpeter and this guy called Yurgon. We juggled on either side of them around the terraces in Paris, and then I would go and collect money from the tables and that’s how I started”. Guy and the group then continued to travel through France, until he decided to part from them in the south, where he met a portugease fire eater who taught him how to do ‘proper’ structured shows.

When he came back to England he joined one of the two at the time, juggling clubs called ‘Full Time’ in Bristol. Straight from circus school, he went to Blackpool Pleasure Beach and was their in-park entertainer for 5 years, travelling around Europe to different theme parks in Sweden and Germany performing a variety of tricks such as, juggling, stilt walking and unicycling. He then goes on to say “We’d have to do individual shows, so i started doing my rope walking show – I mean it wasn’t like it is now – but the basic idea was there. So people would hold the rope and I’d juggle fire. I didn’t really have any lines of my own, so I think I probably stole everybody elses and just made it up as I went along”. He talks fondly of another two performers who who helped him adapt and mould his show “I worked with two much older guys, they were in their 40’s and i was in my 20’s at the time, one was a mime and the other was a quite successful puppeteer, big on sesame street. But they sort of took me in and, you know, polished my show up a bit more”. 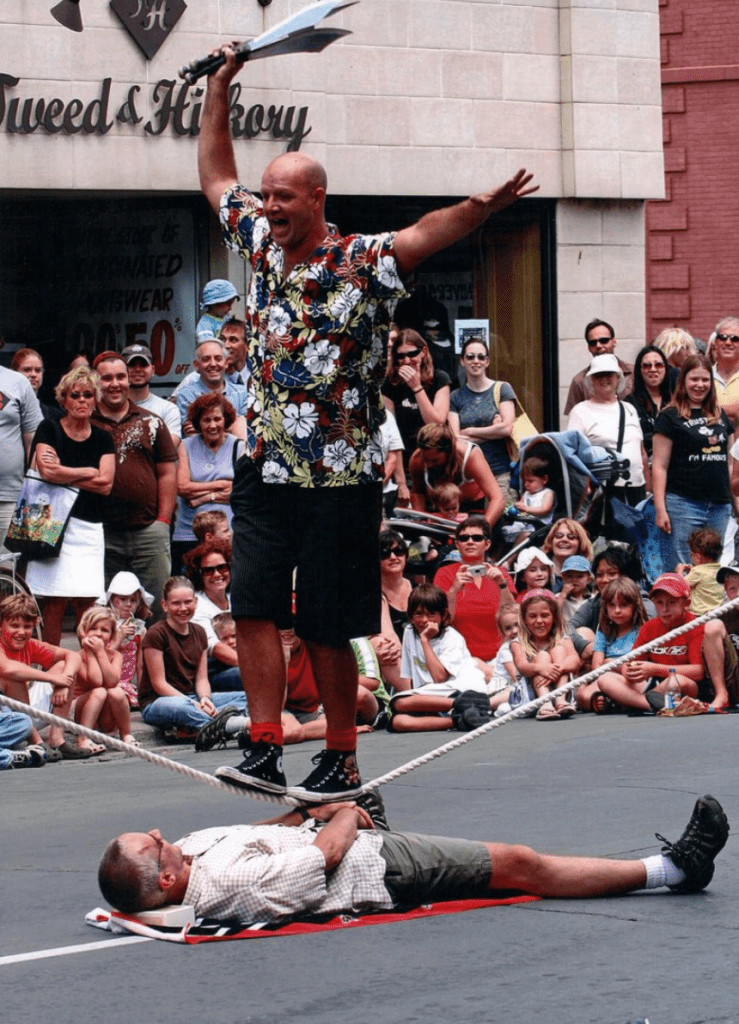 After spending 5 years working for pleasure beach, Guy decided to move onto a new venture, and in 1995 he went to Covent Garden to start performing there. So before starting in Covent Garden, he had already been performing shows for 6/7 years. Laughing, Guy goes on to tell me that he has been performing for 32 years and “it’s been that long since i’ve had a proper job”.

Conversation then moved onto his most memorable performance.  Whilst Guy was in Boston, he was coming to the end of his street shows and was on his unicycle looking out into the crowd when he noticed Penn Jillette was standing watching him “I saw him, he was a really, really tall guy, 6ft 7 or something, and he just stands out and he was watching me and I was just like ‘oh this is unusual’ and i even mentioned it in my show ‘oh look a celebrity is watching’ “. It wasn’t until after the show that Penn Jillette then went over to speak to Guy and says ‘ohh, groovy guy is the best act in boston and im going to give him 10,000 dollars!’ “So i think that is definitely my most memorable show” Guy says laughing.

Understandably, this was his greatest achievement professionally as he goes on to explain “when somebody like Penn Jillette tells you that you know, you’re really good, and that he likes your show and thinks you’re funny, it’s just really really nice isn’t it. I think whenever someone in a profession says they like your show, it always makes you feel really really good, so yes I guess that’s my greatest achievement professionally”.

Guy easily makes me understand how performing to a large crowd is a really important factor for performers as he goes on to tell me about another one of his most memorable performances in Sweden where he performed at the gothemberge theatre and dance festival with his friend Surge, who was a mime, and it was his first ever really big show “i remember looking around and there was this square, bigger than Covent Garden, and we just literally filled the whole place up, and i remember that, that was a great show”. He then eagerly continues to talk about another show in Sweden where he performed juggling fire torches at the top of a hotel where the king arrived by helicopter “I remember looking down at the crowd, at about 20,000 people down there, and my heart was really racing, and i was juggling 4 fire torches and i just thought i’m not going to do any tricks, i don’t want to drop a torch and i just did that for 3 minutes and i think it was the longest 3 minutes of my life”, Guy says laughing.

When Guy talks about his favourite place to perform, you can really hear the enthusiasm and passion in his voice about Covent Garden. “Covent Garden market. The reason is, it’s just a very historical place, and on a sunny day and when everything is right, it doesn’t always happen, but when you fill up the west piaza, and you’ve got everybody watching on the balcony, it’s just really really good and it feels so natural. It’s everything that street performing should be”. 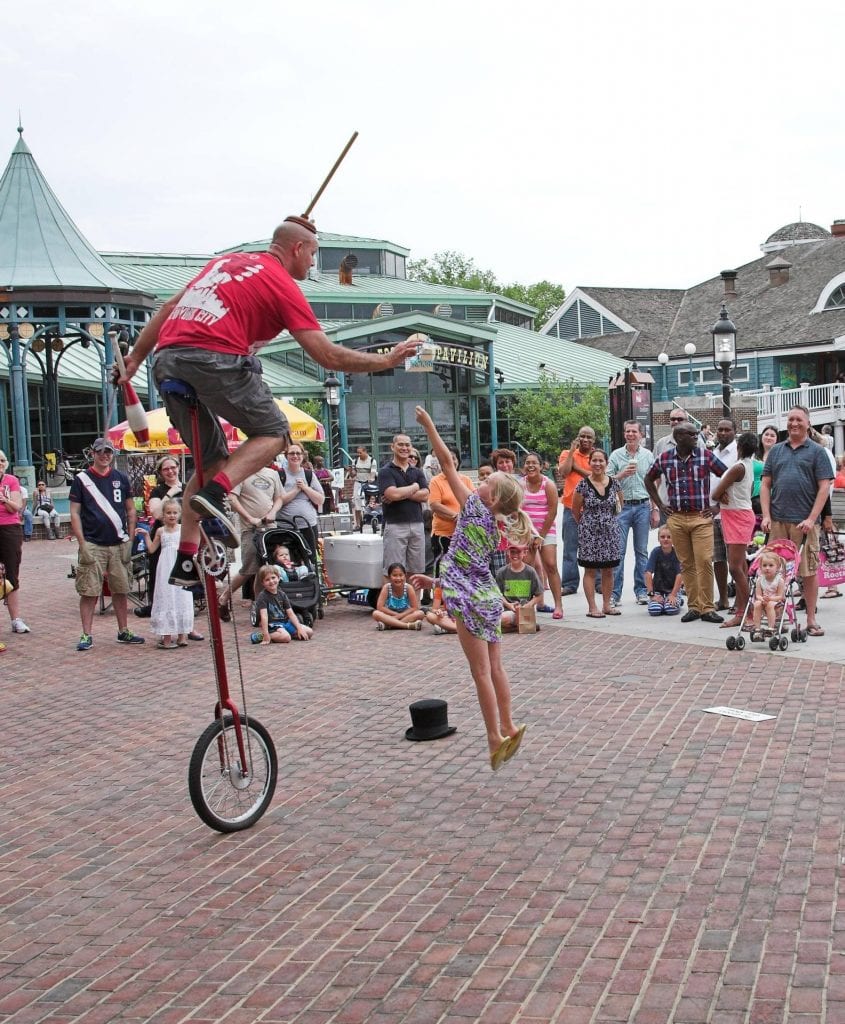 Guy has a handful of performers who he believes are inspirations to him and have helped him develop and become the fantastic performer that he is today. Back when he started in the late 80’s there was a french circus called Archaos who were punks and included props in their shows such as head chainsaws and motorbikes “They came along and completely changed everything for us all. So yeah, Archaos were a huge inspiration”. He then goes on to talk about how a lot of elements of  his shows come from Spike Milligun and the Two Ronnies who are also “great inspirations”. Chris Caemo, a famous juggler is another one of Guy’s inspirations, who’s famous for his cigar boxes and 3 ball juggling shows.

Being such an experienced performer, there have been many funny moments that Guy has experienced throughout his career, of which I had the pleasure of hearing two of them. The first was when he was living in Key West, Florida, and performing at the Hilton Hotel. He explains laughing “at the end of the shows, we used to get tips and once, somebody threw me a live lobster, which was kind of hard to deal with! I then took it to the chef and he killed it for me and I took it home and I ate it, and it was great! It was well worth it!

The second story, and definitely the one that made me laugh the most was when he spoke about one of his shows at a theme park in Sweden. He was performing with Surge, mentioned above,, and they uses to do two shows in the morning and then another two in the afternoon. He then goes on to say at  lunchtime they would often have a beer with their food, and this one particular afternoon, he may have had a couple too many. As he explains part of his show to me, I start to guess what happens next, “there’s a part in the show where i drop all my cigar boxes deliberately and Surge picks them all up for me and as he picks the last one he would turn and i would pretend to hit him on the back of the head with my cigar box. As Surge bent down and picked up the box, I went to pretend to hit him but I really did hit him and I hit him quite hard and it knocked him out!  He fell on the floor and i thought he was joking until i realised that i had knocked him out and he had to go to hospital! I was like ‘oh my god, i’m so sorry! And he turned around and was like, ‘oh we must leave it in the show, the realism was so good!”

Guy travelled to America at the start of March for some events he had, one at a ski resort in Vermont which unfortunately was cancelled due to the pandemic, and the other in New York, which did happen but there were only 3 people there! He is now in Washington DC with his girlfriend Stephanie, but will be coming back to England at the end of April. When he is in the UK, Guy lives near Norfolk, where he travels to and from London and especially Covent Garden most of the time. However he is planning on returning to the US for the second half of the year depending on the next few months “Hopefully, i should be coming over here from the 21st July, pretty much till october the 3rd, doing state fairs and festivals”.

Whilst he can’t go out and perform at events and street shows, Guy has been putting more of his attention into his company that he has with his girlfriend Stephanie called Fizzical Fairytales. This is circus theatre shows for children, such as Hansel and Gretel and their own story called ‘the princess in the far far away tower’.In the current times they have been adapting their shows to audio versions which can be accessed on their Youtube channel here. “So we’ve been doing all the sound effects ourselves, so in the selfish giant there’s lots of hail and stuff , so I was dropping almonds out of a jar to get the rain effect. There’s another bit where I had to knock down a wall, so we had some bricks in the house, so I pushed them over. We had a lot of fun doing this”.

As well as these audio stories, he has been spending his time doing other things such as practising magic and juggling tricks, playing guitar and ukulele and skateboarding. Laughing he adds in “trying not to drink till 6 o’clock!” which I think is something most of us can relate to!

Like many other performers, one of the first things Guy wants to do once out of lockdown is perform a street show “ Doing a show would be really nice. All performers I think really crave an audience and when we don’t get it, i think we get a bit, you know, don’t feel loved, so there’s that”. Other than that, the second choice is going to the pub as he says “It’ll just be nice to be with other people”, which i definitely agree with!

Guy’s top tips for staying at home during isolation is to “do all the things you never normally have time for, practise the trick you need to practise, keep exercising and make it interesting for you, take up those things you use to do and enjoy yourself!”. 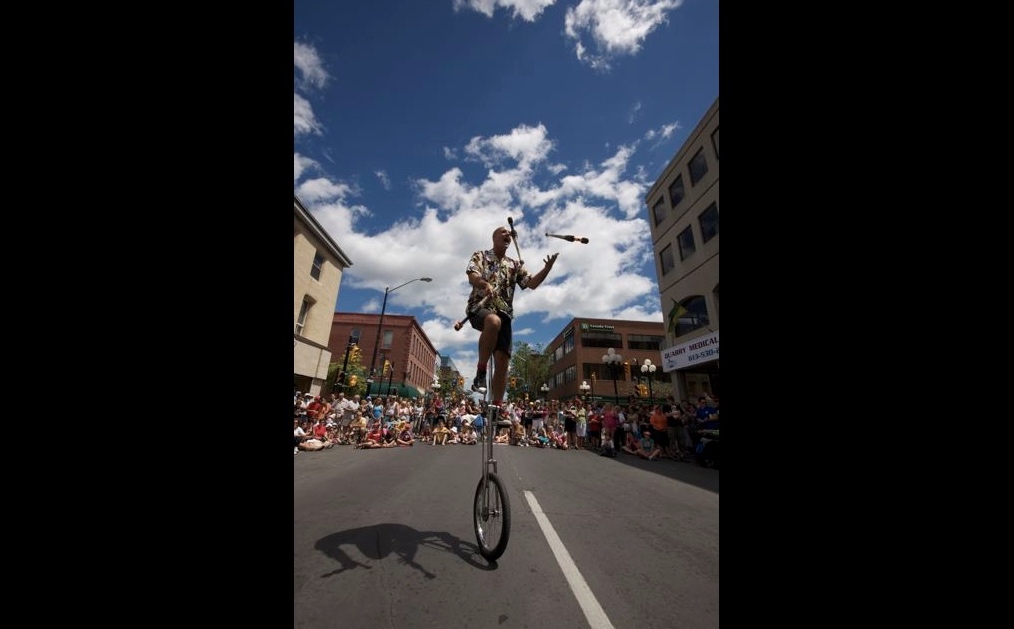